I recently participated in a blog tour for this book and it was such a great experience! I loved the experience of live-tweeting and hosting a giveaway, and it’s something I want to continue to do!

But now, it is time for my own review of this book! 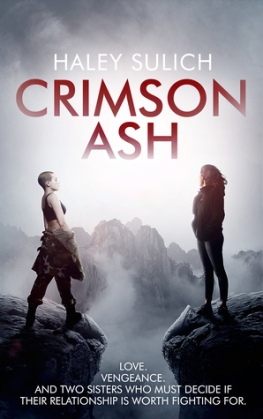 Synopsis (Goodreads): You may live as a soldier or face death. Choose wisely.

Solanine Lucille wants her little sister back. Eight years ago, the government kidnapped her sister Ember, stole her memories, and transformed her into a soldier. But Solanine refuses to give up. Now that she and her fiancé have located the leader of a rebel group, she believes she can finally bring Ember home. But then the soldiers raid the rebels, killing her fiancé and leaving Solanine alone with her demons and all the weapons needed for revenge.

After raiding a rebel camp, sixteen-year-old Ember doesn’t understand why killing some boy bothers her. She’s a soldier—she has killed hundreds of people without remorse. But after she fails a mission, the rebels hold her hostage and restore her memories. Ember recognizes her sister among the rebels and realizes the boy she killed was Solanine’s fiancé.

Ember knows she can’t hide the truth forever, but Solanine has secrets too.

As their worlds clash, the two sisters must decide if their relationship is worth fighting for. And one wrong move could destroy everything—and everyone—in their path.

Review: I think the premise for this book was great. However, I think it failed in execution.

As soon as I started reading this book, I felt out of sorts. This novel throws you right into the action … but with very little background. It almost felt like I was reading the second book in a series, and not the first. I kept waiting for there to be an explanation or some kind of recounting of events to explain how things got to be to the present time in the book, but it didn’t really happen. The few things that were explained were glossed over, which was disappointing. I love reading about the world authors create, but this novel really didn’t do that. No context = tons of confusion!

The novel looks like it is going to be full of action … and while there is some of that, it is mostly about the bond between Ember and Solanine. I actually liked the way the author told this. As an older sister, I could really connect with the sisters in this story and how they struggled to trust each other. The emotional interactions between the siblings was done quite well. However, apart from their bond, I didn’t really feel like the sisters had any well-developed interactions with any of the other characters in the book. Told in alternating perspectives, we read about how each sister learns to forgive themselves and move on from their guilt through the help of various other characters. But it was all so one-dimensional; I never got a feel for the other characters and the interactions were just too rushed for them to have any significance or value.

One of the characters that completely baffled me was Nightshade, who is part of the resistance (and no, this resistance is also not really explained). For someone who is supposed to be a leader, she didn’t do much of it. Nor did she have any plans. She did nothing and was swayed by her own emotions. I think this issue could have been resolved if the author had built the character better and had a more concrete backstory that was explained.

There are a lot of instances of self-harm and abuse in this novel, which may bother some readers. At first, I appreciated the author mentioning these things in the story, as it highlights how easy it is to get into destructive behaviour patterns. However, it became too frequent of an occurrence, and began to feel like the author was including these instances just for the sake of having something to write about.

Before the halfway point of the book, not much was happening. It was very focused on the sisters trying to communicate. After the halfway point, the plot started to move fairly quickly. But the lack of explanation about the way this dystopian world was set up meant I had a lot of questions and very few answers. There was a lot of redundancy in the action events themselves, with characters getting caught, then escaping, then getting caught again. It just got boring very quickly.

Overall, I think that the concept behind this novel was good but the execution was lacking. There needed to be a lot more world-building and explanations for how things work. Characters also needed to be more developed. There needs to be the right balance between theme/plot and setting/world-building, and this novel did not have that. However, since I liked the sisterly bond aspect, I’m bumping my rating up to a 2/5 stars.

I received this novel as an advance copy from NetGalley in exchange for my honest review.

Review: The Ballad of Songbirds and Snakes by Suzanne Collins

Review: From Twinkle, With Love by Sandhya Menon